Where are the tails in the coronavirus mRNA from? 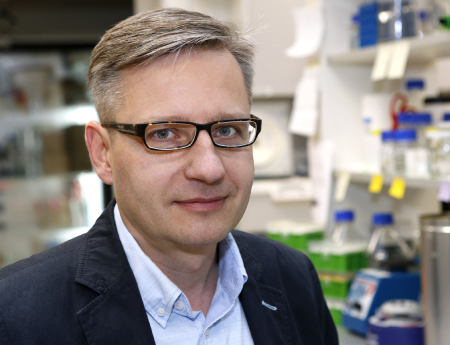 We already know quite a lot about the SARS-CoV-2 coronavirus. We understand how it spreads and penetrates into human cells; we recognise its genome and the proteins that build it. However, several details relating to the production of virus proteins in host cells still remain unclear. The answer to one of such quite detailed but significant questions is going to be provided by a research group working under the supervision of Professor Andrzej Dziembowski PhD., from the RNA Biology Laboratory of the International Institute of Molecular and Cell Biology in Warsaw. The research is financed by the Foundation for Polish Science, from the European Union funds.

The SARS-CoV-2 coronavirus belongs to the group of RNA viruses, which means that its genetic material is a single RNA strand. After infecting the host cell and entering the cytoplasm of that cell, the viral RNA strand serves as a matrix for the synthesis of viral proteins, i.e. it is the so-called messenger RNA (mRNA). Viral mRNAs are very similar to any other mRNAs found in a human cell, so the virus can use human cellular machinery to produce its proteins.

“Cellular mRNAs must be properly prepared to be the matrices in the protein synthesis process. It is a relatively complicated process, which involves, among other things, adding appropriate structures on both ends of the mRNA strands: a so-called cap is added at one end and a poly(A) tail at the other. In the case of human mRNAs, these modifications occur – with the help of appropriate enzymes – in the cell nucleus, which is where the mRNA is formed, based on the DNA found in the nucleus. Both the cap and the poly(A) tail protect mRNA from degradation and ensure its stability. Furthermore, the poly(A) tail is essential for efficient protein production. Only such mature mRNAs are transported from the cellular nucleus to the cytoplasm, where the protein synthesis machinery is located. The coronavirus mRNA looks the same as human – it also has a cap on one end and a poly(A) tail on the other. This is all the more puzzling because the whole life of a coronavirus takes place in a cytoplasm, it does not enter the cell nucleus, which is where the enzymes responsible for mRNA processing are located. We already know that the enzyme necessary to synthesise the cap encodes the virus genome. However, the origin of the poly(A) tails in the virus mRNA is as yet uncertain. This is the question we are currently trying to answer,” says Professor Andrzej Dziembowski.

Poly(A) tails of the mRNA and the process of their creation have been studied for many years by Professor Dziembowski’s team, and the question of the origin of these structures in the mRNA of the SARS-CoV-2 coronavirus, although important, has not been selected by most researchers to be the focus of their work. “Thousands of people in the world are currently working on decoding the basic enzymes of the virus, and our research goal is completely different, and seems to be unique. We hope to be able to find the answer to our question within a year. When we achieve this, we will be able to think of various practical applications of this knowledge,” asserted Professor A. Dziembowski.

The project is financed from EU funds, from the European Regional Development Fund, as part of the Smart Growth Operational Programme (SG OP), under the TEAM grant. The funds in the amount of PLN 850,000 were granted as a result of a theme-specific competition for financing new research tasks related to the Covid-19 pandemic, conducted by the Foundation for Polish Science. The total budget of the competition was PLN 15 million. The funds were allocated for the implementation of 14 projects.

Prof. Andrzej Dziembowski is a molecular biologist, biochemist and geneticist, graduate of the Faculty of Biology at the University of Warsaw. For several years he worked at the CNRS Centre for Molecular Genetics in Gif-sur-Yvette, Paris. He has been awarded numerous prizes and scholarships, including a grant from the European Research Council (ERC StG) and the Minister of Science Award on two occasions. In 2018, he received the Foundation for Polish Science Award in the field of Life and Earth Sciences for the explanation of the function of key enzymes degrading RNA.

The TEAM programme is implemented by the Foundation for Polish Science from EU funds from the European Regional Development Fund as part of the Smart Growth Operational Programme, Axis IV: Increasing the Research Potential, Measure 4.4 Increasing the Human Potential in the R&D Sector.