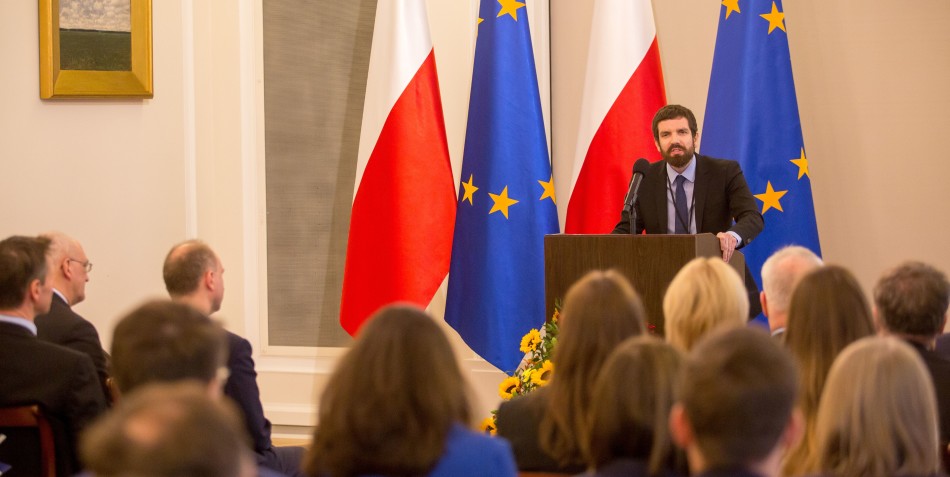 Cambridge Polish Studies, established in 2014 through the efforts of groups including the Foundation for Polish Science (FNP), is one of the few autonomous centres in the world offering the possibility to learn about Poland. Although the programme has achieved success within less than two years in operation, its financial security is guaranteed only through 2018. To see that it does not disappear from the list of programmes offered by the University of Cambridge after that, the Foundation for Polish Science has launched the process of raising an endowment to ensure the stability and growth of the centre.

Cambridge Polish Studies is the most popular course of its type at the world-renowned Faculty of Modern and Medieval Languages, with nearly 70 students after less than two full academic years. They not only learn the Polish language, but first and foremost the country’s culture, literature and art. “These are Polish cultural studies more than Polish language studies,” said Prof. Włodzimierz Bolecki, vice president of the Foundation for Polish Science. “Graduates from studies of this type become specialists in Polish affairs. Currently there is a real shortage of such people.”

Dr Stanley Bill stands behind the success of the programme. In 2014 he won an international competition to head the Polish centre at Cambridge. A British citizen raised in Australia, comparative literature scholar and specialist in the work of Czesław Miłosz, Bill created both the programme of studies and an agenda for numerous cultural and scholarly events to raise the level of general knowledge about Poland (such as readings by authors, conferences, film screenings and guest lectures). They attract hundreds of participants, promoting the centre and buildings its recognition.

Cambridge Polish Studies was launched in 2014 thanks to four sponsors: the Foundation for Polish Science, the Grabowski Foundation, the University of Cambridge and the Zdanowicz Foundation. These institutions provided £340,000 to ensure the centre’s operations through 2018. To expand the formula for the studies and ensure the centre’s financial stability, it is necessary to establish an endowment of £3 million to finance its continued operations. Therefore the Foundation for Polish Science has decided to initiate the fundraising process and encourage sponsors from Poland and the UK to support the initiative.

The Foundation for Polish Science already has experience in similar initiatives. Thanks to FNP’s long-term commitment, the Polish Studies Program was launched in 2014 at Columbia University in New York. It was made possible by collection of a fund of over $3 million in the United States and Poland. Apart from FNP, which contributed $250,000, the drive was supported by more than a dozen organizations and companies like Enea and PGE Polska Grupa Energetyczna. State institutions were also involved in the fundraising efforts. Since 2009 the value of the endowment has doubled to $6 million, ensuring the safe future of the Polish program at Columbia. FNP counts on similar success in the case of Cambridge Polish Studies—particularly as the centre has ambitious plans for development, including leading an initiative for cooperation with other British universities for further growth of Polish studies in Europe, offering attractive programmes for the academic community and the broader public.

Launching the fundraising effort was the goal of the conference organized by FNP on 19 February 2016 at the Belweder palace in Warsaw entitled “Polish studies abroad: University of Cambridge.” The conference involved Polish businesses and state authorities, including Minister of Science and Higher Education Jarosław Gowin, Deputy Prime Minister and Minister of Culture and National Heritage Piotr Gliński, and Deputy Minister of Treasury Filip Grzegorczyk.

Dr Stanley Bill, head of Cambridge Polish Studies, discussed the creation and success of the centre, along with distinguished British professors knowledgeable in Polish affairs, including Cambridge Slavonic studies professor Simon Franklin, Dr Rory Finnin, head of the Department of Slavonic Studies at Cambridge, and Dr Harald Wydra, political science lecturer at Cambridge. As Bill said, “Knowledge of Polish culture, literature and history will enable students to understand Poland’s place in the continent. Graduates of the faculty where the studies are held often find work at high positions in government institutions, diplomacy, public administration, finance and business. This is important for Poland itself and its affairs. Crucially, Polish studies will spread objective knowledge about Poland.”

Prof. Sir Leszek Borysiewicz, Vice-Chancellor of the University of Cambridge, said at the conference, “This is currently the most popular course of this type at our university. Information about our events devoted to Poland reach thousands of people through the press and the Internet, and interest in Poland at Cambridge is growing. Polish studies are of great importance to us. We cannot understand the history of Europe if we do not understand the role of Poland in today’s world.”

Also taking part in the conference were British Ambassador to Poland Robin Barnett, Prof. Maciej Żylicz and Prof. Włodzimierz Bolecki, president and vice-president of the Foundation for Polish Science, and Richard Wojciech Tobiasiewicz from the MB Grabowski Foundation. Wojciech Kolarski, deputy minister in the office of President of Poland Andrzej Duda, read a letter to conference participants from the President.