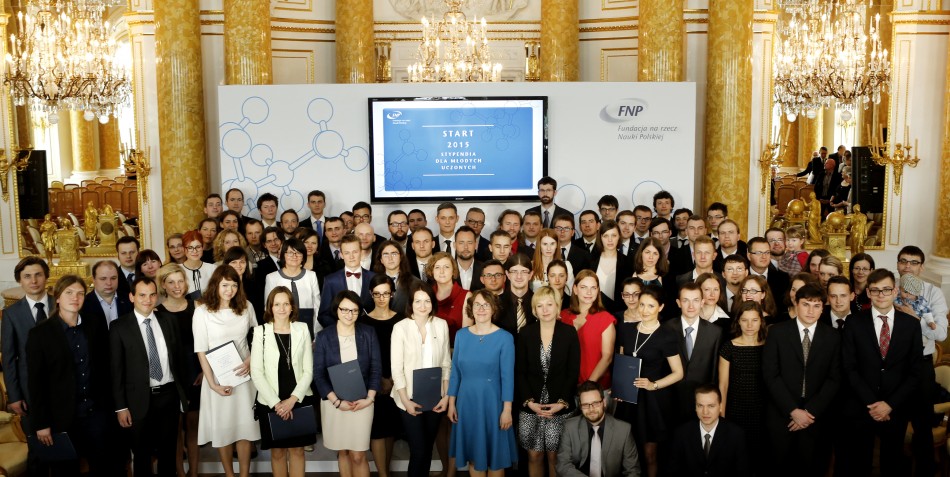 START programme diplomas were presented to this year’s beneficiaries of the programme on the morning of Saturday, 23 May at the Royal Castle in Warsaw. The recipients of the prestigious stipends – the most gifted young researchers from all over Poland – received their diplomas from Prof. Andrzej Jerzmanowski, chairman of the FNP Council, and Prof. Maciej Żylicz, the FNP’s president. This was the 23rd presentation of the stipends.

The ceremony began with an address from Prof. Maciej Żylicz, who underlined that receiving a START stipend proved that a young researcher had achieved something new and original in science. “Evaluating the applications, we don’t follow the rules that have proliferated in our community; we don’t count ‘impact factors’, we don’t count citations, we don’t count the number of papers. It’s enough to have just one, but good paper to be rewarded with this stipend”, Prof. Żylicz said. He also revealed his recipe for success in science to the young researchers. “You have to be curious, ask the right questions, work very hard, know how to overstep the boundaries between disciplines and… get lucky”, Prof. Żylicz said. He also pointed out how important it was in scientific work to change your environment, for example by going abroad to complete a postdoctoral fellowship: “It’s a very tough but extremely important decision”. At the same time, though, Prof. Żylicz encouraged young researchers to return to Poland. “We really want to see you return here and share the knowledge you obtain abroad”, Prof. Żylicz underlined.

After Prof. Żylicz’s speech the time came to present the diplomas. The first to receive them were the beneficiaries whose scientific achievements got the highest marks from reviewers and who received special recognition: Mateusz Chmurski, PhD (b. 1985) from the Faculty of Polish Studies at the University of Warsaw, Michał Jakubowicz, MA (b. 1987) from the Faculty of Geographical and Geological Sciences at Adam Mickiewicz University in Poznań, Michał Pilipczuk, PhD (b. 1988) from the Institute of Informatics at the University of Warsaw, Michał Tomza, PhD (b. 1987) from the Faculty of Chemistry at the University of Warsaw, and Maciej Wielgus, MSc Eng. (b. 1986) from the Faculty of Mechatronics at the Warsaw University of Technology (the diploma was collected on his behalf by Prof. Krzysztof Patorski, PhD habil. Eng., his scientific supervisor). A diploma was also presented to Martyna Molak-Tomsia, PhD (b. 1985) from the Museum and Institute of Zoology of the Polish Academy of Sciences in Warsaw, who received the Barbara Skarga Scholarship awarded to the person whose scientific output and research plans outlined in the START competition were very highly evaluated and whose research boldly overcomes interdisciplinary boundaries, opens up new research perspectives and creates new values in science.

Apart from the recipients, the ceremony was also attended by their guests and representatives of the scientific community. Letters were addressed to the beneficiaries by Polish President Bronisław Komorowski and Prime Minister Ewa Kopacz.

The START programme, next to the FNP Prize, is one of the two longest-running FNP programmes. It is also Poland’s biggest stipend programme for the best young researchers. In this year’s competition, the 23rd, stipends in the START programme were granted to 130 beneficiaries. They were chosen in a several-stage competition procedure from 1,241 applicants. The annual stipend amount is PLN 28,000 which the recipients may spend as they wish. The stipends of beneficiaries receiving special recognition is raised to PLN 36,000. The total amount the Foundation is assigning to START stipends in 2015 exceeds PLN 3.6 million.

Congratulations to all the beneficiaries!