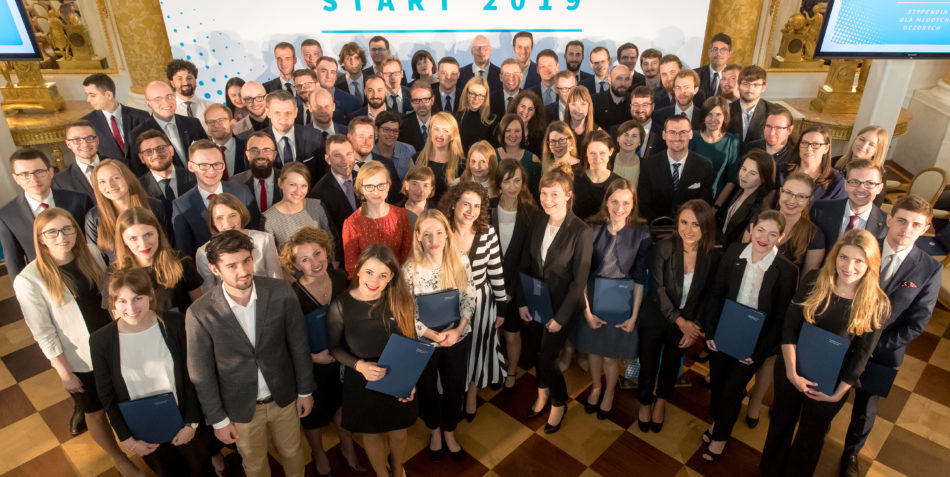 The award ceremony for this year’s laureates of the START programme was held on Saturday, 25 May 2019, at the Royal Castle in Warsaw.

Stipends were awarded to the most talented young researchers from all over Poland who won this year’s competition in the START programme. “Diamonds are everywhere,” said Prof. Maciej Żylicz, president of the Foundation for Polish Science, in his address to the laureates. He pointed out that a study by the Foundation of the careers of nearly 3,000 START laureates found that researchers who received a START stipend went on to earn a postdoctoral degree an average of 10 years earlier than the national average. “You have a baton in your backpack,” Prof. Żylicz told the laureates.

The ceremony was attended by the laureates along with their families and numerous representatives of the scientific community. Congratulatory letters were sent by Prime Minister of Poland Mateusz Morawiecki, Sejm Speaker Marek Kuchciński, and Senate Speaker Stanisław Karczewski.

The START programme of the Foundation for Polish Science is the country’s largest stipend programme for the best young researchers representing all scientific disciplines. The aim of the programme is to support outstanding young scholars and encourage them to pursue further scientific development. Each START laureate receives a one-year stipend of PLN 28,000, which may be used for any purpose.

There were 899 applicants in this year’s edition of the competition, from whom 100 laureates were chosen.

This year four laureates were awarded distinctions for outstanding scientific achievement: Agata Perlińska and Michał Parniak-Niedojadło from the Centre of New Technologies at the University of Warsaw, Dr Rafał Szabla from the Institute of Physics of the Polish Academy of Sciences in Warsaw, and Michał Włodarczyk from the Faculty of Mathematics, Informatics and Mechanics at the University of Warsaw. Each of them receives an augmented stipend of PLN 36,000.

The Barbara Skarga Stipend was also awarded, in recognition of an individual whose research boldly crosses the boundaries between various fields of inquiry, opening up new research perspectives and creating new values in science. This year’s winner of the Barbara Skarga Stipend was Dr Joanna Rak from the Faculty of Political Science and Journalism at Adam Mickiewicz University in Poznań. She is studying the culture of political violence and protest movements in Europe. She will also receive an augmented stipend of PLN 36,000.

This year’s laureates join a group of over 2,900 previous laureates who have received START stipends over the course of 27 years of implementation of the START programme. In total the Foundation has distributed over PLN 81.5 million to START laureates.

The stipends in this year’s competition, for which FNP has earmarked PLN 3 million, are financed from the Foundation’s own funds and from gifts from private donors and firms—the Institute of Biotechnology and Molecular Medicine and the company SensDx. Stipends for economists and mathematicians in the 2019 competition are funded by the National Bank of Poland as part of its economic education programme. In addition, the Foundation uses funds from contributions of 1% of individuals’ personal income tax for the augmented stipends of laureates receiving distinctions.

Recruitment for the 2020 START programme will be held this autumn.