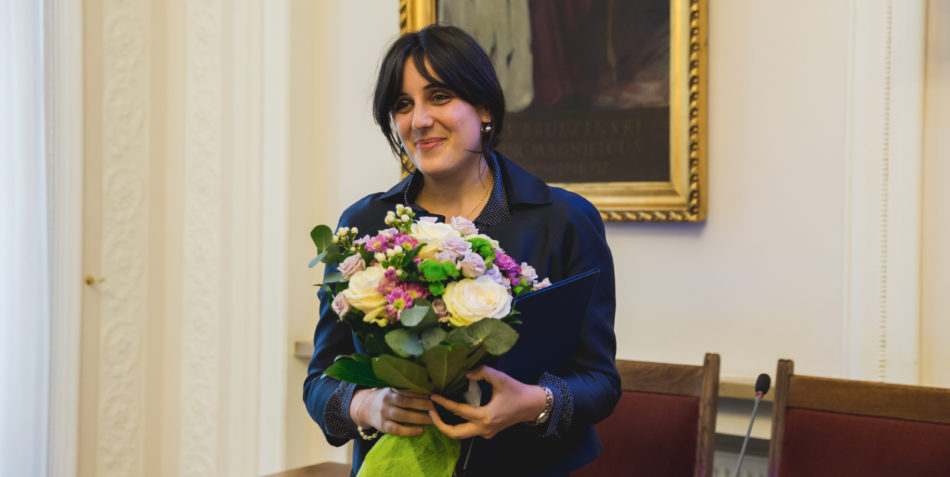 At a ceremony in Warsaw, the second Leszek Kołakowski Honorary Fellowship was awarded by the Foundation for Polish Science to Dr Caterina Tarlazzi, a historian of medieval philosophy at the University of Geneva.

The award ceremony was held on 22 October 2018 in the Senate Hall of the Kazimierzowski Palace at the University of Warsaw. Dr Tarlazzi said at the event, “To receive this fellowship named for Leszek Kołakowski, a distinguished thinker of the 20th century, is a great honour for me. This distinction will certainly strengthen my cooperation with the Polish research community.”

The fellowship was awarded to the laureate by Prof. Włodzimierz Bolecki, vice president of the Foundation for Polish Science. Remarks were also delivered by Dr Dmitri Levitin, the first winner of the award and now a member of the international committee for the competition. “The laureate is exceptionally deserving of this award not only for the unique philosophical insight she displays in her works, but also for her outstanding linguistic and archival skills,” said Levitin. “Dr Tarlazzi has the potential to change our understanding of medieval philosophy as well as our understanding of the history of Western philosophy.”

Among those congratulating Tarlazzi at the ceremony were Jürg Stephen Burri, Swiss Ambassador to Poland; Dr Maciej Duszczyk, Vice-Rector for Research and International Relations at the University of Warsaw; and Dr Jakub Kloc-Konkołowicz, director of the university’s Institute of Philosophy. At the end of the event, Dr Tarlazzi delivered a lecture entitled “The 12th-century debate over universals: What it is, and is not, about,” touching on the philosophical issues tackled by the medieval French scholar Peter Abelard. An analysis of Aberlard’s views is one element in Tarlazzi’s broader research on universals.

Dr Caterina Tarlazzi defended her doctoral thesis in 2013 in the cotutelle model, earning a Doctor Europaeus degree granted jointly by Università degli Studi di Padova in Italy and Université Paris IV Sorbonne in France. She was then awarded a three-year fellowship by the British Academy at the University of Cambridge. Since 2017 she has worked at the University of Geneva. She has also been awarded fellowships under grant programmes, including the Ambizione Fellowship from the Swiss National Science Foundation and a Marie Skłodowska-Curie Global Fellowship, as well as several distinctions and awards for her research.

The Leszek Kołakowski Honorary fellowship was established by the Foundation for Polish Science to commemorate the work of Prof. Leszek Kołakowski, a distinguished philosopher, co-founder and one of the most important exponents of the Warsaw School of the History of Ideas. The aim of the fellowship is to recognize scholars early in their careers who have already done outstanding work in the history of ideas and medieval to modern philosophy up to 1939. A competition is held every two years using a nomination system, in which candidates are nominated individually by scholars from around the world. The laureates are selected by the award committee, made up of philosophers and historians of ideas of international standing. The first fellowship was awarded in 2016 to Dr Dmitri Levitin from the University of Oxford.