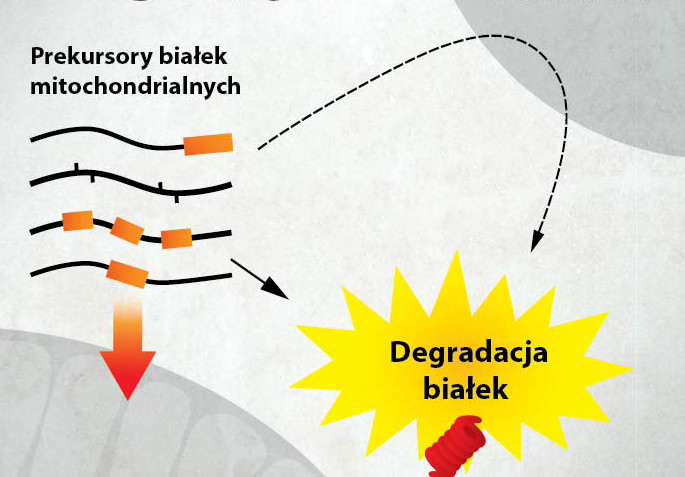 In the study published in Nature the scientists have revealed the mechanism called UPRam that protects the cell from stress caused by mistargeted mitochondrial precursor proteins accumulating in the cytosol.

The basis of this project was laid in the fruitful collaboration between the Laboratory of Mitochondrial Biogenesis led by Agnieszka Chacinska from the International Institute of Molecular and Cell Biology in Warsaw and the laureate of the Foundation for Polish Science’s WELCOME programme and the Department of Functional Proteomics and Biochemistry led by Bettina Warscheid from the University of Freiburg in Germany. Their unbiased approach resulted in a comprehensive and quantitative characterization of changes in the proteome of cells with a defect in the import of proteins into mitochondria. Lidia Wrobel and Ulrike Topf, together with other researchers from the Chacinska group and scientists from the Institute of Biochemistry and Biophysics PAS in Warsaw, followed several biochemical paths to identify these changes, which are critical for homeostasis and survival of the cells exposed to mitochondrial import defect.

The researchers found two main arms of the response protecting against mitochondrial protein import defects, inhibition of cytosolic translation and activation of the major protein degradation machinery, the proteasome. They discovered a crosstalk between the state of mitochondria and regulatory mechanisms responsible for maintaining cellular protein homeostasis. Activation of the proteasome could be uncoupled from translational inhibition simply by mistargeted mitochondrial proteins despite the presence of healthy mitochondria. This stimulation of the proteasome is driven by its more efficient assembly as a direct response to the amount of mistargeted proteins. The new mechanism protects cells against stress and therefore promotes their survival.

The study was performed using the simple Eukaryote, yeast Saccharomyces cerevisiae, as a model. However, both mitochondrial dysfunction and cellular protein homeostasis failure are commonly implicated in many degenerative and age-related diseases in humans. The newly discovered mechanism represents the missing link between the processes underlying degenerative pathologies, and may provide new strategies to maintain cellular survival and to preserve organismal fitness over time.

Research of the Chacinska group was funded by the Foundation for Polish Science’s WELCOME programme co-financed by the EU within the European Regional Developmental Fund and by the National Science Centre grants.