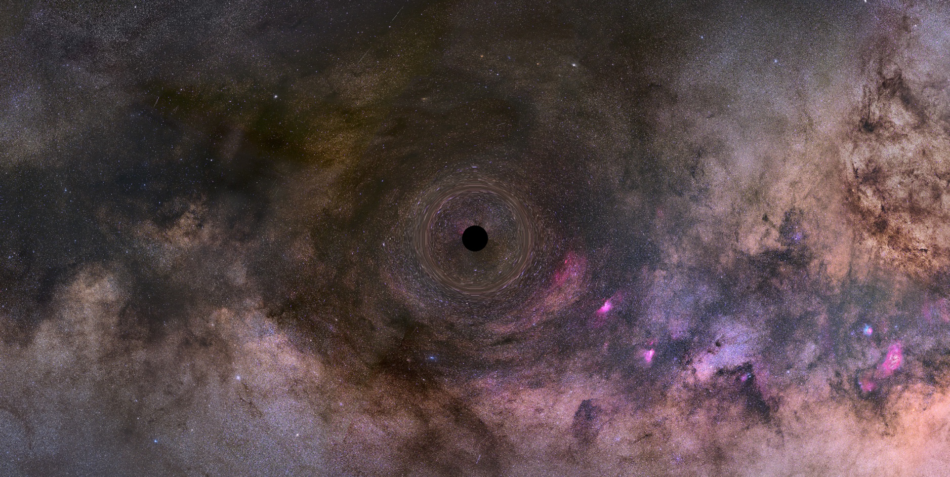 The Milky Way galaxy is expected to host over 100 million isolated black holes. Two independent teams of scientists, including astronomers from the Astronomical Observatory of the University of Warsaw – among them many winners of FNP prizes and programs, have for the first time discovered what may be a free-floating black hole.

The existence of black holes, that is, objects whose gravity is so strong that nothing, even light, can escape it, was theoretically predicted in the early 20th century by Karl Schwarzschild, who studied the equations of Einstein’s theory of general relativity. For many years, black holes remained purely theoretical objects, since – by definition – they were invisible to traditional astronomical telescopes. It was not until recently that scientists realized that black holes indeed exist and that they may play a major role in the evolution of the Universe.

Theories of stellar evolution predict that the most massive stars should end their life in giant explosions known as supernovae. A dying star should form a black hole with a mass ranging from a few to several masses of the Sun. Hundreds of millions of such objects should roam our Milky Way galaxy, evading detection.Fortunately, dark objects can be detected with the aid of gravitational microlensing, a phenomenon predicted by the theory of general relativity. A black hole deforms spacetime in such a way that the path taken by the light bends toward it.

The gravity of a black hole acts as a giant magnifying glass, which can deflect and magnify the light of a distant background source star. An Earth-based observer can detect a brief transient brightening of the source star, known as a photometric microlensing event. The duration of the event depends on the mass of the lensing object, the more massive the lens, the longer the event. Microlensing events by black holes can last even a few years. Gravitational lensing can also alter the position of the source star in the sky, a phenomenon called astrometric microlensing. Precise measurements of both effects – photometric and astrometric – allow one to determine the mass – and so the type of the lensing object.

The gravitational microlensing event OGLE-2011-BLG-0462 was discovered on June 2, 2011 by astronomers from the University of Warsaw-led OGLE project, which is led by prof. Andrzej Udalski. The object was independently detected by the New Zealand-Japanese MOA project. When we detected the brightening, which was undoubtedly by gravitational microlensing, we did not anticipate that this would be a breakthrough discovery – says Prof. Udalski. Now, the event became the jewel in the crown of over 20 thousand microlensing events discovered by us.

The microlensing event OGLE-2011-BLG-0462 was regularly observed by the OGLE team for the next nine years. Over 15,545 photometric measurements were collected, which became the basis of the model of this event. In the second half of 2011, when it was clear that the event timescale is relatively long (and so the lensing object could be massive), a team of astronomers led by Prof. Kailash Sahu (Space Telescope Science Institute) has initiated observations of the event with the Hubble Space Telescope (HST), allowing them to precisely measure the position of the object in the sky. These observations were supplemented in 2021 with additional measurements taken with the HST by another team led by a PhD candidate Casey Lam and Prof. Jessica Lu (University of California, Berkeley). The analysis of photometric and astronometric measurements was performed independently by the two teams. The results of the modeling clearly indicate that the event OGLE-2011-BLG-0462 was caused by an object several times more massive than the Sun. A light of an ordinary star of that mass would have been easily detected, so the lensing object must be a free-floating stellar-mass black hole – says Dr Przemysław Mróz, a member of the OGLE project who carried out the modeling.

The mass of the newly detected black hole is 7 solar masses according to the analysis of the Sahu’s team or 4.2 solar masses according to Lam and Lu. The difference likely results from a different HST data reduction and modeling approaches. The microlensing signal in the astrometric data is small and is prone to systematic errors. The Lam’s team also discusses the possibility that the object may be a lower-mass neutron star.The discovery of the first isolated black hole in the Milky Way is a breakthrough and opens a new path for detecting these rare objects. Current and future missions, such as European Space Agency’s Gaia spacecraft, should be able to detect significantly more isolated black holes to study their population in the Milky Way.This discovery also marks an important epoch for gravitational lensing studies. We used gravitational microlensing to study the composition of dark matter in the Milky Way, detect extrasolar planets and free-floating planets. The discovery of an isolated black hole was long awaited and marks an important epoch – says Udalski.

The results of the study were published in:

[Photo: This is an illustration of a close-up look at a black hole drifting through our Milky Way galaxy. The black hole is the crushed remnant of a massive star that exploded as a supernova. The surviving core is several times the mass of our Sun. The black hole traps light due to its intense gravitational field. The black hole distorts the space around it, which warps images of background stars lined up almost directly behind it. This gravitational “lensing” effect offers the only telltale evidence for the existence of lone black holes wandering our galaxy, which may be a population of 100 million.(Credit: NASA, STScI, image: FECYT, IAC).]