“We are seeking the ‘fifth force’ in physics”: interview with Prof. Krzysztof Pachucki, 2018 Foundation for Polish Science Prize laureate 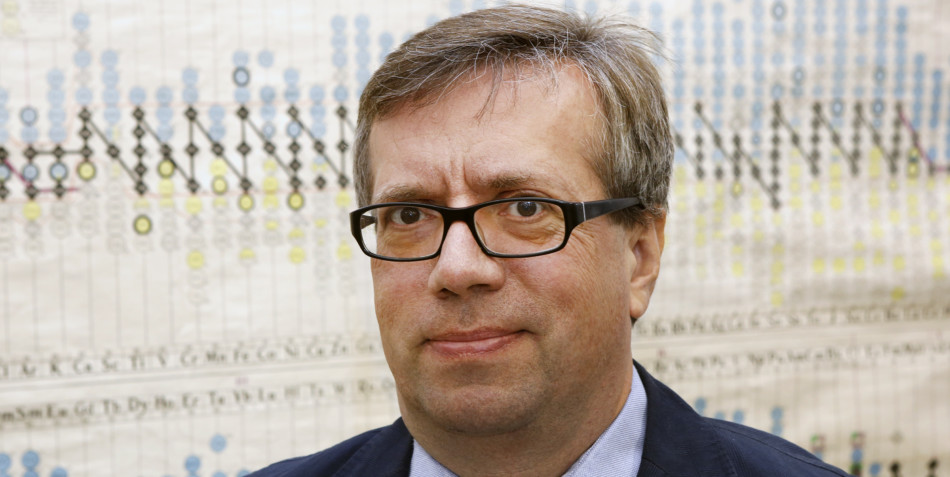 “We can’t yet describe the fifth force, but we have very strong grounds for suspecting its existence,” Prof. Krzysztof Pachucki, winner of the 2018 Foundation for Polish Science Prize in the mathematical, physical and engineering sciences, told Karolina Duszczyk (Science in Poland editor at the Polish Press Agency).

KAROLINA DUSZCZYK: Did your fascination with calculations appear on its own, or was it inspired by a mentor?

KRZYSZTOF PACHUCKI: I was interested in mathematics as early as age five. I taught it to myself, encouraged by my mother. I had no idea then that something like physics existed. I began to explore it in elementary school. I understood early on that theoretical physics doesn’t differ much from mathematics. We use the same tools, a similar language. Although I’m from the Tri-City, I decided to study at the Faculty of Physics at the University of Warsaw. I wanted to get the best education. From the fifth year at the university, my mentor was Prof. Iwo Białynicki-Birula, who worked at what is now the Centre for Theoretical Physics of the Polish Academy of Sciences. Unfortunately, after completing my master’s I couldn’t immediately pursue my doctorate because I had two subjects to make up: Russian and military service.

But the army didn’t conquer your scientific passion.

The beginnings of my career were atypical. I worked at the Faculty of Pharmacy at the Medical Academy of Warsaw, where I taught mathematics and physics. Then I was “taken” by the military, and had children. During my military service I contacted Prof. Białynicki-Birula and passed the exam for doctoral studies while enlisted for a year in Kostrzyn nad Odrą. That’s when I found my place at the Centre for Theoretical Physics. For the first two years I did nothing but study. It wasn’t until the third year that I discovered an interesting scientific problem and solved it. Thus in the course of one year I completed my entire doctorate.

What was so interesting?

I took on the issue of self-interaction of the electron in the hydrogen atom. This causes the energy levels of the hydrogen atom to undergo slight shifts. This is called the Lamb shift. This inspired us to create the beautiful theory known as quantum electrodynamics. Through my calculations, I verified how precise this theory is. At the same time, in Garching, near Munich, a doctoral student of Theodor Hänsch, the later Nobel laureate, measured this phenomenon exactly. We completed our work almost simultaneously and could compare the results. They agreed very beautifully. We checked whether the theory of quantum electronics very precisely describes the hydrogen atom, i.e. the shifts of energy under the influence of self-interaction. My doctoral thesis enabled me to find the path I followed in all my subsequent works. I developed calculations concerning simple atomic arrangements.

With such calculations, is that work you do alone, or does it require a research team? How did the cooperation with Theodor Hänsch come about?

Initially I conducted research in solitude. I very much valued the scientific cooperation with Prof. Białynicki-Birula. He has extensive knowledge and shared it with me when I needed it. I learned by myself, and thus questions arose. He managed to answer all of them.

After finishing my doctorate I left for the Max Planck Institute in Garching. That is where they were making measurements in the hydrogen atom, and I made calculations for them. For three years I worked as the only theoretician in an experimental team. Although there was no talk yet of a Nobel Prize for Hänsch, it was the best centre in Europe. The results achieved there were incredibly inspiring for me. I worked very hard then. I managed to make several very strong calculations, and they verified them with measurements. The cooperation continued after my return to Poland. Several years later Theodor Hänsch created a device, the optical frequency comb, which provided a very precise and convenient method for measuring frequencies of light in any range. For that he received the Nobel Prize. In general it was a very strong team. Several of the colleagues I worked with went on to become professors at top universities in Germany and Switzerland. The cooperation with Hänsch was inspiring. He didn’t impose anything, but let the members of his team sink or swim. Some of them sank, but if you could handle it you had the best possibilities. I had unlimited funds available, but I didn’t have to use them because they were not necessary for me. But the working conditions were ideal. The same applied to everyone. Either you managed to grow scientifically, or you became an engineer and worked for industry.

What kind of teacher and research team leader are you?

I am similar to my mentor—I give people free rein. If they come to me and ask a question, I will answer it. But I don’t force my help on them. That suits some, other not so much, because I also allow them to sink or swim. I’ve had doctoral students who had to change their research topics because they couldn’t handle the independence and freedom in their work. I’m not an academic adviser who will stand watch over someone. I haven’t had many master’s or doctoral advisees, but nearly all of them have made scientific careers. Ulrich Jentschura is a professor in the United States. Grzegorz Łach works here in my faculty. Mariusz Puchalski is a professor in the Faculty of Chemistry at Adam Mickiewicz University. Jacek Zatorski did scientific work for many years in Heidelberg, Germany. Now I have four doctoral students and several close colleagues who were with me earlier during their postdoctoral work.

What are you all working on now? Does precise calculation of physical constants have practical applications?

We want to examine how precise are the laws of nature that we know. We verify laws of physics by comparing very precise calculations with experiments. If they don’t jibe, that is a signal for us that perhaps there is something we don’t know. It’s very likely that there are some other forces that are not yet known. We would very much like to identify them. Most often it turns out that the results of the experiment are erroneous. But if on rechecking the difference still appears, that is a basis for discovering new laws of physics, new forces.

We know that there are electromagnetic forces and gravitational interactions. Beyond that there are also the “strong interactions” which hold nucleons in the nucleus. The fourth force is the weak interactions. They violate the symmetry of parity, that is, they cause physics to be different in front of the mirror than behind it. It turns out, for example, that clockwise and counter-clockwise molecules may have different energies of vibration. These are small differences, but they are there. So we know four forces. But what if others exist? It is to discover them that we measure transitions in the hydrogen atom and other atoms and compare them with the calculations. For a long time we believed that we could find proof of the existence of the fifth force. Lots of debate was sparked by the measurement of the radius of the proton from the Lamb shift in muonic hydrogen, where the electron is replaced by a muon. It did not agree with the analogous measurement made on a “regular” hydrogen atom, and no one could rationally explain this within the bounds of known physics. Measurements on hydrogen atoms conducted recently using a different method than before indicate the need to verify the earlier hydrogen experiments.

What is the sense in seeking for something that we don’t even know exists?

We can’t yet describe the fifth force, but we have very strong grounds for suspecting its existence. Based on research on gravitational interactions, we know that dark matter exists. Moreover, there is much more of it than of visible matter. No one knows what it is, everyone’s looking for it, but for it to be observable, it must interact with visible matter. This fifth force, which remains unknown to us, might be such an interaction. We are seeking any manifestations of this force at the level of the laboratory table, by comparing very precise experiments and calculations.

Is this a scientific dream, or a goal that could actually be achieved?

Every one of us working in theoretical physics has this dream. We are doing all we can to make it come true. Everyone hopes to be the one to succeed. Will it happen? None of us knows. Discoveries don’t arrive upon command. We try to create the conditions for an experiment to have the greatest sensitivity and precision, in order to capture the smallest manifestation of this fifth force. We are raising the precision through more exact measurements (e.g. on the order of 12 digits)—in Toruń, Munich, Amsterdam or Paris. The calculations most often involve the spectrum of the hydrogen atom, the helium atom, or hydrogen molecules. Sometimes we find discrepancies between the measurement and the calculations, and we verify them, but so far we have found either errors or some new effects that fall within known physical laws. I should add that it’s very hard to repeat somebody’s experiment, and can take many years.

Do you often travel to other research centres to meet with scientists with similar interests and aspirations?

More often I invite guests to visit from abroad. If I carry out any discussion, it’s by telephone. Travel is usually connected with scientific conferences. I have a group of colleagues that is largely virtual. Currently I am pursuing projects in cooperation with researchers working in four different places: Vojtěch Patkóš is in Prague, Vladimir Yerokhin in Saint Petersburg, Jacek Komasa and my former student Mariusz Puchalski in Poznań, and of course my own doctoral and master’s students. I treat the Foundation for Polish Science Prize as an honour for my whole team, because we achieved a lot of the results together.

If you have a calling to be a physicist, you’re probably a physicist around the clock. But no doubt you have your ways of taking a break from theories and calculations?

I ride a bicycle to work every day—regardless of whether it’s summertime, or raining, or 20 degrees below zero. The bike lets me unwind and forget about everything. Then I simply don’t think. And in the evenings I walk, which is my form of relaxation. Once a week I run a half-marathon along the beautiful trail from the Łazienkowski Bridge to the North Bridge, on the east side of the Vistula, through a landscape park with beautiful riverbanks and forest.