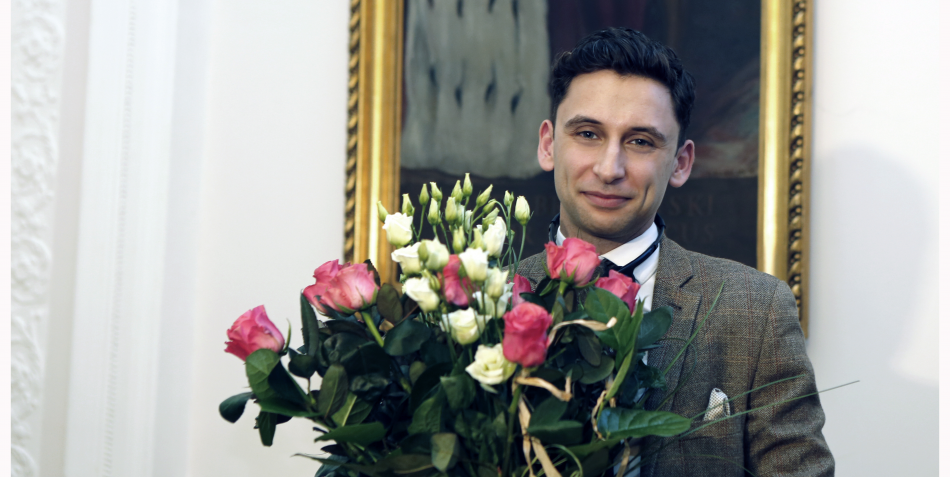 The first-ever Leszek Kołakowski Honorary Fellowship has been awarded to Dr Dmitri Levitin, a researcher in intellectual history and the history of philosophy at the University of Oxford. The award ceremony was held at the University of Warsaw as part of the celebration of the university’s bicentennial.

The Foundation for Polish Science established the fellowship to commemorate the achievements of the late Prof. Leszek Kołakowski. The award may be given to a young scholar researching medieval or modern philosophy up to 1939. The winner of the first competition, Dr Dmitri Levitin, is a graduate of the University of Cambridge, where he earned an MPhil and, in 2011, a PhD in history with a dissertation on the history of philosophy in England in 1650–1700. He has received numerous prizes and distinctions, including the Chancellor’s Fellowship at the University of Edinburgh. He was also a visiting fellow at the Folger Shakespeare Library in Washington. Since 2015 he has worked as a research fellow at Oxford’s prestigious All Souls College—an institution Leszek Kołakowski was affiliated with for many years. “It’s a huge honour,” Levitin said. “Leszek Kołakowski was one of the great thinkers of the 20th century, so to have my name associated with his in this way, I couldn’t be more honoured.”

The prize was delivered to the winner by Prof. Włodzimierz Bolecki, vice president of the Foundation for Polish Science. A citation was read by one of the members of the international jury for the competition, Prof. Bogdan Szlachta of Jagiellonian University: “Despite his young age, as he is not even 30, the winner of this competition without a doubt has outstanding achievements on a very important issue, the transition in the history of philosophy and the history of science between what is Renaissance and what is modern.”

Dr Levitin was congratulated by the rector of the University of Warsaw Prof. Marcin Pałys, the director of the Institute of Philosophy at the University of Warsaw Dr Jakub Kloc-Konkołowicz, and, on behalf of the British Embassy, Sarah Tiffin, deputy head of mission. Then Dr Levitin delivered a lecture entitled “How did Isaac Newton become a heretic?” during which he discussed previously unknown documents shedding new light on the evolution of Newton’s theological interests. His analysis of the views of the great scientist is one element of a broader study Levitin is conducting, devoted to the influence of modern European universities on the growth of intellectual movements in Europe.

The ceremony was held on 25 October 2016 at the Kazimierzowski Palace at the University of Warsaw.