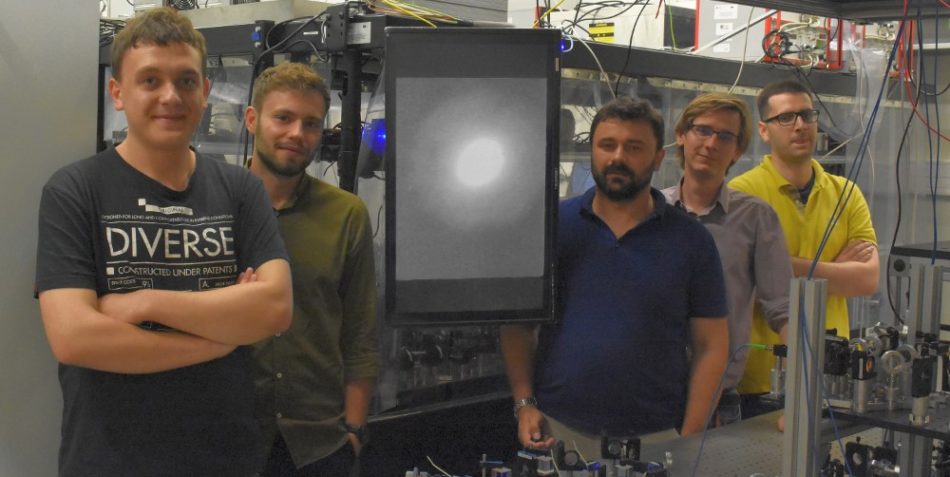 A group of PhD students from the Faculty of Physics of the University of Warsaw led by dr Mariusz Semczuk, winner of the competition held under the HOMING programme of the Foundation for Polish Science has obtained ultracold caesium and potassium atoms, the first such atoms in Poland. This is an essential step for the use of ultracold atoms in experiments described from the perspective of quantum mechanics rather than classical mechanics.

Atoms trapped in the so-called magnetooptical traps were cooled to the temperature of a few hundred microkelvins. In a non-scientific language, the project can be compared to solid foundations for a house – a basis and a crucial step for further stages of construction.

The technology is one of a kind, as dr Semczuk’s team is the first in Poland and one of three in the world to achieve this, with other research centres being located at the University of Innsbruck, Austria and the Durham University in the United Kingdom. The laboratory opens up possibilities of carrying out experimental research in Poland with a subject matter of global significance, which has previously been absent in our country, except for Michał Zawada’s team from the Nicolaus Copernicus University in Toruń. With this unique experimental system in place, the team has created opportunities for further experiments involving cold atoms and for the development of new laser cooling methods, thanks to which it will be possible to make similar miniature systems using cold atoms in quantum technologies. For several months the focus will be on investigating the properties of the mixture of both atoms trapped simultaneously in a different type of trap, an optical dipole trap, for a better understanding of interactions between these two atoms. This step is essential for further experiments using a mixture of both atoms and possibly, in a longer-term perspective, for investigating surface phenomena in quantum liquids and physics dependent on space dimensionality.

“FNP’s support has greatly contributed to this success,” said dr Semczuk. “It is of particular importance in projects such as mine, where the first few years are spent on creating the basis for research, constructing experimental systems, usually with no published results, as some areas of physics are characterised by a relatively long initial phase. FNP’s decision to grant financial support is a sort of a quality certificate for the project. Furthermore, support from the HOMING programme has made it possible to establish a strong team, and to launch cooperation with Professor Nagerl and Professor Cornish, who are authorities for researchers dealing with the physics of ultracold atoms and particles.

Interestingly enough, at the time of launching work on the system in 2016, dr Semczuk’s team consisted of 2nd-year students of Bachelor’s studies. Now they are beginning their PhD studies and have already achieved this enormous success. It is worth mentioning that experiments with ultracold atoms are very complex and require the researchers to present various skills, such as programming, familiarity with issues of ultrahigh vacuum, design in 3D CAD, and manual skills in general. There are few areas of contemporary physics that require such versatility.