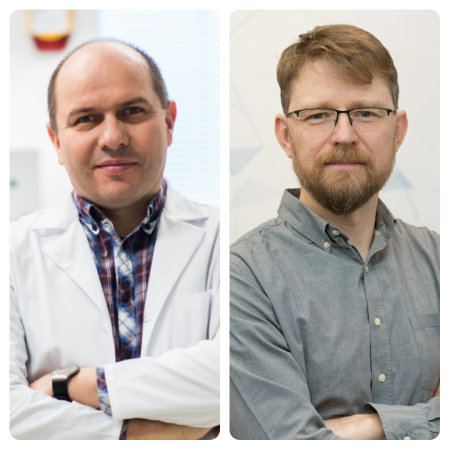 The world of science is taking intense efforts to find compounds which would stop the replication of the SARS-CoV-2 coronavirus, thus providing causative treatment for COVID-19, and blocking the spread of this pathogen. One of the ideas is to inhibit the activity of one of the viral enzymes which are necessary for the replication of its genetic material, creation of new viral cells and attack against the host’s cells. Scientists from Warsaw have chosen two of the enzymes, the so called methyltransferases.

The works on the identification or development of chemical compounds blocking the methyltransferases of the SARS-CoV-2 coronavirus (inhibitors of the enzymes) have been jointly conducted by the teams run by prof. dr hab. Jacek Jemielity, from the Centre of New Technologies at the University of Warsaw, and prof. dr hab. Marcin Nowotny of the International Institute of Molecular and Cell Biology in Warsaw. The research is financed from European funds by the Foundation for Polish Science, as part of the extension of grants awarded under the TEAM programme to both scholars.

“All viruses replicate only inside the host’s cells, using the metabolic machinery of the infected cell. The SARS-CoV-2 coronavirus belongs to the group of RNA viruses, which means that its genetic material is a single RNA strand.  The viral RNA strand is not compatible with the host’s cell machinery, and must be transformed into a genetic form which may undergo expression in the host cells. Only then can the virus replicate and infect further host cells. The process is divided into several stages and its final outcome is the creation of a viral mRNA based on the original viral RNA, serving as a matrix for translation, i.e. the synthesis of viral protein. Before the translation of the viral mRNA takes place, it must be properly prepared for the process. Several proteins are responsible for such preparations, including methyltransferases nsp14 and nsp 16. Therefore, blocking the proteins should stop the virus replication process, and for that reason we are trying to identify compounds which will serve as methyltransferase inhibitors,” explained Prof. Jacek Jemielity.

Methyltransferase nsp14 is responsible for the creation of a cap at one of the ends of mRNA. It is a unique structure indispensable in the process of protein biosynthesis. The cap at the end of the mRNA is the focus of Prof. Jemielity’s research financed from the TEAM grant. Methyltransferase nsp16 is, in turn, responsible for the modification of the viral mRNA which makes human immune system unable to identify the virus as a threat. This allows the viral mRNA to avoid immune response in the host’s cells.

In order to find compounds blocking the action of methyltransferases, scholars from Prof. Jemielity’s group are applying high-throughput methods based on fluorescence. Thus, it is possible to test thousands of different compounds in just several dozen hours. In April 2020, Prof. Jemielity’s team published a paper in the “Chemistry European Journal” in which they showed the effectiveness of the method in the search for the inhibitors of methyltransferase nsp14. “We are testing compounds located in various chemical libraries, both ours and the ones available on a commercial basis. We are performing our search among compounds which have already found their application in treating people, though in indications other than COVID-19, and among compounds which have not been applied in medicine yet. We have testes around 3,000 compounds and we have managed to identify about a dozen inhibitors of SARS-CoV-2 methyltransferases, which we characterised in chemical and biophysical terms,” said Prof. Jacek Jemielity.

A promising cooperation among scientists

The compounds identified by Prof. Jemielity’s group as methyltransferase inhibitors are referred for further analysis to Prof. dr hab. Marcin Nowotny’s team who specialise in structural studies of complexes of proteins and small molecules.  Marcin Nowotny’s laboratory has been cooperating with Polish and international biotechnological companies, applying structural biology methods to support the process of developing new pharmaceuticals.

“Our task is to crystallise the complex of the enzyme and the newly discovered inhibitor. Thanks to obtaining such crystallographic structure, we can see how the inhibitor is located within the structure of the protein which is our therapeutic goal, and explain the nature of the interactions between them. The understanding of the molecular foundations of the inhibition will allow us to propose such chemical modifications of the inhibitor so that its properties can be further enhanced. In addition, we will be able to work on the increase of the metabolic stability of enzyme-inhibitor complexes, and on the improvement of the inhibitor permeation though cell membranes,” explains Prof. Marcin Nowotny. “What’s more, the crystallisation of selected inhibitors will allow us to design further inhibitors with the use of computing methods. These will be so called second generation inhibitors with greater inhibition potential and desired pharmacokinetic properties. After that, the compounds will be synthesised in Professor Jemielity’s laboratory,” he added.

The best inhibitors the scientists will be able to obtain will then be tested on coronavirus-infected cells, to examine whether the virus replication can be actually blocked. This stage of the experiments will be conducted in collaboration with properly equipped laboratories which run tests involving the infection of cell cultures with SARS-CoV-2 virus.

If an effective inhibitor is discovered among the compounds which are already authorised for use in patients, it will be possible to register such substance for the treatment of COVID-19 within several to dozen months. “The safety of applying such compound in the treatment of people has been proven, so it is enough to choose the right dose and confirm its effectiveness in the treatment of COVID-19 in patients. The marketing of compounds which have not been registered yet is much more time-consuming. For such compounds to be authorised for use in the treatment of people, it is required to conduct pre-clinical trials, toxicological tests, and complete three clinical trial stages. Before the effectiveness of such compound can be tested, it is first mandatory to examine its safety, and that is why it normally lasts between 5 and 7 years. In the current pandemic circumstances, the procedure may be accelerated, but not significantly, as such studies take time,” asserted Prof. Jacek Jemielity.

The  Project is financed with EU Funds from the European Regional Development Fund, as part of the Smart Growth Operational Programme (SG OP) under which the TEAM FNP grants were awarded to Prof. Nowotny and Prof. Jemielity. The funds with a total amount of over PLN 3.7m were granted as a result of a theme-specific competition for the financing of new research tasks related to the Covid-19 pandemic, held by the Foundation for Polish Science. The total budget of the competition was PLN 15m. The funds were allocated for the delivery of 14 projects.

Prof. dr hab. Jacek Jemielity specialises in organic and bioorganic chemistry, and biochemistry. He graduated from the Faculty of Chemistry at the University of Warsaw, where he also completed his doctoral degree programme. After that, he was employed with the Institute of Experimental Physics at the Faculty of Physics UW. Currently, he runs the Biorganic Chemistry Labolatory (Jemielity Group) at the Centre of New Technologies operating within the University of Warsaw.

Prof. dr hab. Marcin Nowotny runs the Laboratory of Protein Structure at the International Institute of Molecular and Cell Biology in Warsaw. He earned his doctoral degree at the Institute of Experimental Biology of the Polish Academy of Sciences (PAN), after which he worked for a few years at the National Institutes of Health (NIH) in the United States.

The TEAM Programme is implemented by the Foundation for Polish Science with EU Funds from the European Regional Development Fund as part of the Smart Growth Operational Programme, Axis IV: Increasing the Research Potential, Measure 4.4 Increasing the Human Potential in the R&D Sector.