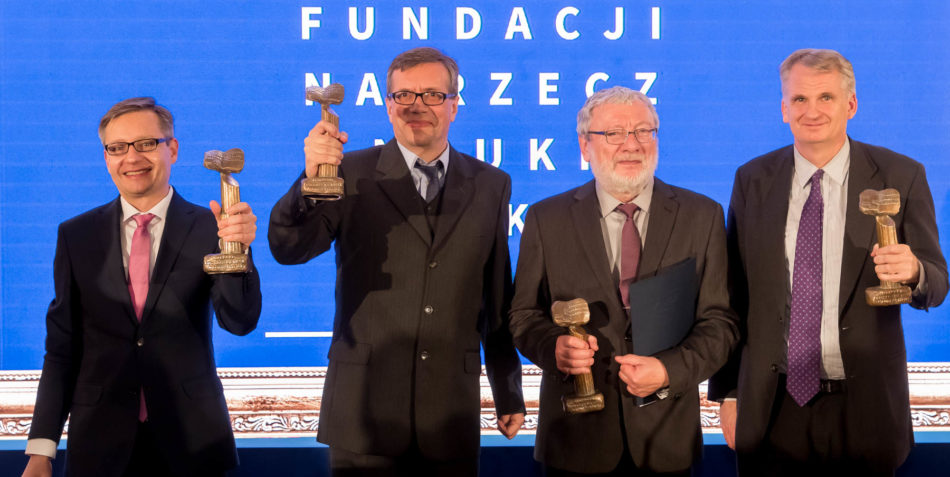 On 5 December 2018, at a gala at the Royal Castle in Warsaw, the Foundation for Polish Science Prize, regarded as the highest scientific honour in Poland, was awarded to four distinguished scholars: Prof. Andrzej Dziembowski, Prof. Andrzej Gałęski, Prof. Krzysztof Pachucki and Prof. Timothy Snyder.

This year’s prizes were delivered to the laureates by the Foundation’s president, Prof. Maciej Żylicz, and the chair of the Foundation Council, Prof. Leon Gradoń. Each of the laureates received a statuette designed and executed by sculptor Ryszard Kozłowski and a cash prize of PLN 200,000.

“Over the past 27 years we have continually improved the system for evaluation of nominees for the FNP Prize,” said FNP president Prof. Maciej Żylicz. “The prestige of this award is founded on the strength of the laureates named each year.”

Speaking at the event, Deputy Prime Minister and Minister of Science and Higher Education Jarosław Gowin said, “The laureates of the FNP Prize personify the criterion of scientific excellence. I believe that in the near future there will be even more room for research freedom for scientists like today’s laureates, thanks in part to our work on the Constitution for Science. I hope that every year the selection of laureates becomes more and more demanding, so that the Foundation chooses only the best of the best.”

The FNP Prize is awarded for significant advancements and scientific discoveries which shift cognitive boundaries and open new perspectives for research, provide an exceptional contribution towards the advancement of the nation’s progress and culture, and assure Poland a significant position for undertaking the most ambitious challenges of the modern world.  The amount of the prize is PLN 200,000.

The FNP Prize is an individual prize awarded through a competition in four fields: life and earth sciences; chemical and material sciences; mathematical, physical and engineering sciences; and the humanities and social sciences. Candidates for this honour may be nominated by distinguished scientists personally invited by the Foundation’s Executive Board and Council. The role of the award committee for the FNP Prize is performed by the Foundation Council, which selects the laureates on the basis of opinions from independent reviewers and experts—mainly from abroad—assessing the candidates’ achievements.

Prof. Andrzej Dziembowski from the Institute of Biochemistry and Biophysics of the Polish Academy of Sciences in Warsaw has won the 2018 Foundation for Polish Science Prize in the field of life and earth sciences for explaining the function of key enzymes involved in RNA degradation, the dysfunction of which leads to pathological states. His discoveries have led among other things to the proposal of a new therapeutic approach in the treatment of bone marrow cancer (myeloma).

Prof. Andrzej Gałęski from the Centre of Molecular and Macromolecular Studies of the Polish Academy of Sciences in Łódź has won the 2018 Foundation for Polish Science Prize in the field of chemical and material sciences for developing a new mechanism for plastic deformation of polymers. Prof. Gałęski’s works have led to the development of super-strength plastics long-awaited by the aviation and automotive industries.

Prof. Krzysztof Pachucki from the Faculty of Physics at the University of Warsaw has won the 2018 Foundation for Polish Science Prize in the field of mathematical, physical and engineering sciences for precise quantum electrodynamic calculation of spectroscopic parameters of lightweight atoms and molecules. These findings are the basis for precise determination of fundamental physical constants.

Prof. Timothy Snyder from Yale University has won the 2018 Foundation for Polish Science Prize in the field of the humanities and social sciences for analysis of the political and social mechanisms that led to national conflicts and genocide in Central Europe in the 20th century. Prof. Snyder’s research has provided a new dimension to the 20th-century history of Central & Eastern Europe.

The FNP Prize has been awarded since 1992. Including this year’s winners, there have been a total of 99 laureates of the FNP Prize, including such distinguished professors as Tomasz Dietl, Elżbieta Frąckowiak, Andrzej Jajszczyk, Krzysztof Matyjaszewski, Karol Modzelewski, Karol Myśliwiec, Andrzej Paczkowski, Jadwiga Staniszkis, Jan Strelau, the late Jerzy Szacki, the late Andrzej Szczeklik, Piotr Sztompka, Andrzej Udalski, Anna Wierzbicka, and Ewa Wipszycka.

The emcee for this year’s awards ceremony for the FNP Prize was science journalist Krzysztof Michalski.