Poland – U.S. Science Award given out 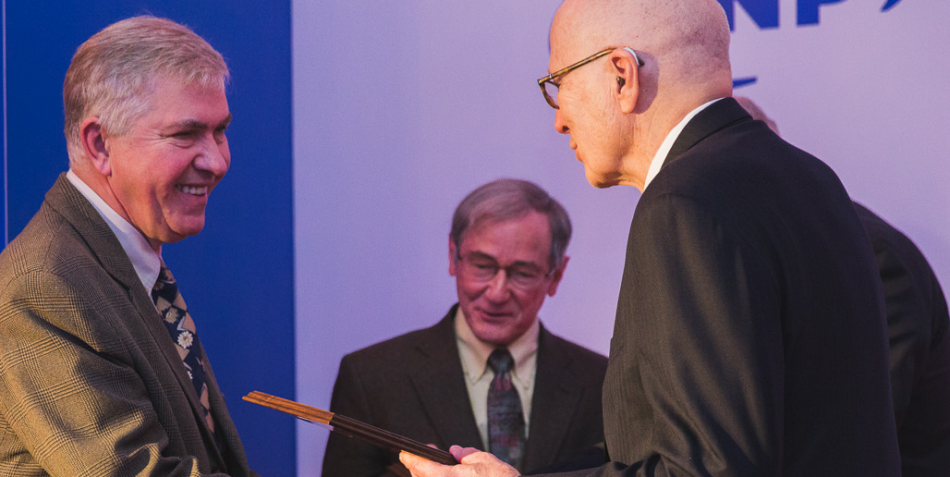 RNA researchers Prof. Ryszard Kierzek and Prof. Douglas H. Turner received the second Poland–U.S. Science Award on Tuesday, 15 November 2016. The award is given jointly by the Foundation for Polish Science (FNP) and the American Association for the Advancement of Science (AAAS).

Professors Kierzek and Turner were recognized for their research on the thermodynamic, biological and structural properties of ribonucleic acid (RNA) and the chemical synthesis of RNA. The diplomas were awarded to the laureates by Prof. Maciej Żylicz, president of the Foundation for Polish Science, and Dr E. William Colglazier, editor in chief of the prestigious quarterly Science & Diplomacy, published by AAAS.

Dr Colglazier said that the Poland–US Science Award is “a way to inspire future generations, showing them that the best method for progress in various fields of study is international cooperation, seeking out the best scientific partners wherever they are in the world.”

Prof. Żylicz said, “One of our laureates is an expert in thermodynamics, and the other in organic chemistry. For many years they have been complementing one another perfectly in the field of science, setting a new standard.”

The researchers began their cooperation more than 30 years ago. The results of their research made it possible to predict the structure of any RNA based on its sequence. The research also elucidated RNA folding rules, a method now used by most RNA research teams.

Prof. Ryszard Kierzek is currently the head of the RNA Chemistry and Biology Laboratory at the Institute of Bioorganic Chemistry of the Polish Academy of Sciences in Poznań. In his research he uses the chemistry, biology, thermodynamics, bioinformatics and structure of RNA to modulate biological activity of RNA correlated with human diseases.

Prof. Douglas H. Turner works at the Chemistry Department of the University of Rochester. He is an internationally acclaimed expert on the biophysics of RNA, especially RNA thermodynamics, and the parameters for prediction of RNA folding are known as the “Turner rules.”

The Poland–U.S. Science Award was established in 2013. It is granted once every two years. Prof. Mariusz Jaskólski and Dr. Alexander Wlodawer won the first competition for research on structural biology. There were 29 applications filed in this year’s competition. The award carries a prize of USD 5,000 for each of the winners.

The ceremony for the second-ever Poland–U.S. Science Award was held on 15 November 2016 at the Sobański Palace in Warsaw. The winners received congratulations from Poland’s Deputy Minister of Foreign Affairs Robert Grey and Alison Dilworth from the US Embassy. Remarks were also delivered by Prof. Andrzej Legocki, who had nominated the winners for the competition.

See photos from the ceremony

Read an interview with the laureates by Magdalena Majewska on Poland.pl