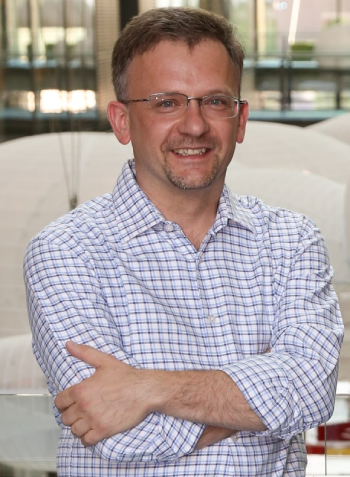 Prof. Tomasz Klimczuk from the Gdańsk University of Technology, winner of programs by the Foundation for Polish Science (FNP), together with researchers from Poland and the USA, discovered two new inorganic compounds which – despite their low-dimensional and non-centrosymmetric structure – exhibit superconductivity. Reported in Advanced Functional Materials, the discovery brings new knowledge to both physics and chemistry. In an interview, Klimczuk tells the FNP about the essence of the discovery, Polish-American cooperation, and a recipe for success.

FNP: Who participated in the research described in Advanced Functional Materials?

What is the essence of the discovery?

The materials we have discovered are superconductors with a critical temperature of 7 K and 5 K, which is relatively high for “classical” superconductors. These materials’ uniqueness lies in the fact that they crystallize in a new type of crystal structure. With a low-dimensional and non-centrosymmetric structure, they show superconductivity, which can be called unconventional.

Superconductors like highly symmetrical structures and there are very few superconductors in a monoclinic (low symmetry) system. But there is more. The physical properties of most superconductors can be described with the well-established BCS model, which assumes that the crystal structure is centrosymmetric: it has an inversion center. Thus, our two materials are, in a way, unique. There are probably less than 100 known non-centrosymmetric superconductors, and we often witness interesting physics in such materials. This is also the case here. Without going into details, we may say that the non-centrosymmetricity and strong spin-orbit coupling jointly cause the critical field that we determined – the magnetic field that kills the superconducting state – exceeds the field determined by the so-called Pauli limit.

Why is this happening?

There are several possibilities. One of them is the potential presence of a triplet component in the wave function describing the Cooper pair. Cooper pairs are elementary current carriers in a superconductor, which are a quantum “connected” pair of electrons. In classical superconductors, pairs are singlet-shaped, i.e. oppositely directed spins (and magnetic moments). The magnetic field tends to align the spins in parallel, so it causes the destruction of pairs. In a non-centrosymmetric superconductor with a strong spin-orbit coupling, it is possible to mix Cooper pairs symmetry, as they can be part singlet and part triplet, which increases their “resistance” to the external magnetic field.

Sophisticated techniques such as muon spin spectroscopy and nuclear magnetic resonance studies will certainly be needed to investigate the symmetry of the superconducting state.

How long was the research conducted?

It was one of those long projects. It all took nearly two years.

Perhaps the biggest challenge was solving the crystal structure, although it was equally difficult to determine the optimal conditions for synthesis. The synthesis of these compounds requires high temperature, high dynamic vacuum, and finding nominal proportions of substrates. Both of these problems are somehow related. Without the knowledge of the crystal structure, the synthesis of pure samples would not be successful. On the other hand, without relatively pure material, the crystallograph would have no material to work with.

Where can your research results be used?

It’s a difficult question. What we do is basic research, which means it is difficult to find an immediate application. At present, superconductors are widely used only in magnetic imaging (MRI) devices, which can be found in any large hospital. We believe that each new superconductor is another step toward materials that can replace, for example, power cables, and thus reduce the costs of electricity transmission. We think our experiment will interest and inspire chemists, material engineers, and solid-state physicists.

The research was conducted in cooperation with scientists from Princeton University, with Prof. Robert Cava’s team. What was his role in this research?

Professor Cava is the undisputed leader among material scientists; his works were cited over 70 thousand times and his Hirsch index is 125 (according to the Web of Science Database). He is not only a solid-state chemist but also a crystallographer. The first structure model we received from Prof. Weiwei Xie and her graduate student (Xin Gui) failed verification with powder diffraction pattern analysis. Prof. Cava suggested changing the symmetry group, which scored a bullseye. Moreover, the Princeton laboratory allowed us to measure specific heat down to 0.4 K, which is impossible in my laboratory.

Your cooperation with Prof. Robert Cava lasts 17 years now. How did it begin? How has it changed over time, and how has it been maintained for so long?

It all started with my email with a request for a one-year postdoctoral fellowship. However, without clear scientific success or letter of endorsement, the fate of my application was doomed to failure. Then I asked if Prof. Cava would have agreed to an externally financed visit (I meant the FNP). His positive answer came the same day.

I went to Princeton as part of the FNP’s KOLUMB* program. The year of internship turned into two years, then I returned to Poland to write my habilitation. There also were short, two-week trips possible thanks to the FNP KOLUMB program. Then I met with Prof. Cava on my way to Los Alamos, where I worked as a postdoc. Finally, in 2014, I became the winner of the FNP MENTORING program, thanks to which I could regularly meet and exchange ideas with Prof. Cava. He shared with me his knowledge of how he manages a research team and the specificity of managing a faculty at such a prestigious institution as Princeton University. What is important and what I think is missing in the education of graduate students in Poland, we discussed grant applications from the perspective of the applicant and the reviewer. Meanwhile, I conducted research, including the development of a method to synthesize a huge family of Skutterudites (over 100 compounds). In short, we may say that our cooperation has evolved from a boss-postdoc relationship through that of mentor-mentee to friendship.

I should mention that in Prof. Cava’s laboratory I am perceived as a physicist, so students (chemists) eagerly come to me with questions about how to interpret results, what else to measure, and how to analyze data. I have a lot of fun teaching them tricks that I learned during an internship at Los Alamos or the Institute for Transuranium Elements in Karlsruhe.

Thanks to the HARMONIA grants from Poland’s National Science Centre – which I implement since 2017 – my cooperation with Prof. Cava has become two-way. It often happens that samples from Princeton are measured at the Gdańsk University of Technology. Moreover, Prof. Cava has visited our university many times, and he eagerly works with Polish students. In 2014, he received an honorary doctorate from the Gdańsk University of Technology.

What was the FNP’s role in establishing cooperation with Prof. Cava and Princeton University?

In short: it was key. I have no doubt that without the FNP’s support, my trip to Princeton would have never happened.

What is your recipe for scientific success?

Never stop dreaming. Nurture the approach of a child who is always surprised, asks questions, and enjoys the slightest success. And one more thing… find your own way. It makes sense to follow others, but success usually comes to the one who can lead, because “the view only changes for the lead dog” (Norman O. Brown).

What advice could you give early career researchers?

Cooperate! Sometimes your project stands still because you do not know what you have discovered and without the help of, say, a crystallographer J, the project will never be completed.

Be brave to go outside of your comfort zone, absolutely go for a postdoc internship after your doctorate. This is not a privilege, it is a necessity. A perspective from afar allows you to gain distance, learn about different techniques, and – what is extremely important – gain a chance to build your own network of scientific connections.

Thank you for the interview.

Prof. Eng. Tomasz Klimczuk is a physicist who specializes in solid-state physics, high-temperature superconductivity, and condensed matter physics. He works at the Faculty of Technical Physics and Applied Mathematics and at the Center for Future Materials at the Gdańsk University of Technology. He is a winner of the START, KOLUMB, and MENTORING programs of the Foundation for Polish Science.

* The FNP KOLUMB program was implemented in 1995-2012 and offered scholarships for postdoctoral internships abroad.